The Harley-Davidson Softail Breakout is a bike full of charisma; it commands it, and receives it wherever you go.

This 2017 Harley-Davidson Softail Breakout is almost new with only 3380 km on it. It has the Vance and Hines pipes, eagle air filter and a H-D back-rest.

Indulge yourself with a cruising bike that is a stunner. It accelerates hard, goes fast in a straight line, and looks fantastic while you're cruising in the saddle.

We are located in Nerang, just over the Qld border, not far from Australia's well-attended theme parks and nearby world class surf breaks. Finance, insurance and shipping available Australia wide. 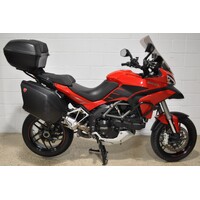