The Hypermotard style of bike is quite unique because it rides like no other. This larrikin-inspired approach to riding on the road suits riders who have entrenched dirt riding thinking, riding approach and style in the way they ride; and this includes on the road.

That is, they have a very upright and high riding position, they like riding with their arms raised and wide on the handlebars instead of tucked in. They like to charge into corners late, and have options when they get there, whether that's with power, or sharp steering or with flickability afforded by sticky tyres.

The Hypermotard is light and super responsive, has a free-spinning engine with loads of linear grunt, has well-sorted suspension and a steering geometry usually found on competitive dirt bikes. The Hypermotard doesn't go around corners; it searches for them, attacks them aggressively, and devours them.

We are Queensland's only stand-alone Ducati Dealership, as well as being independently owned. Finance, insurance and shipping available Australia wide. 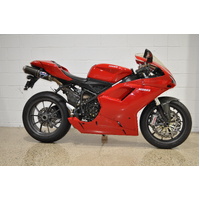